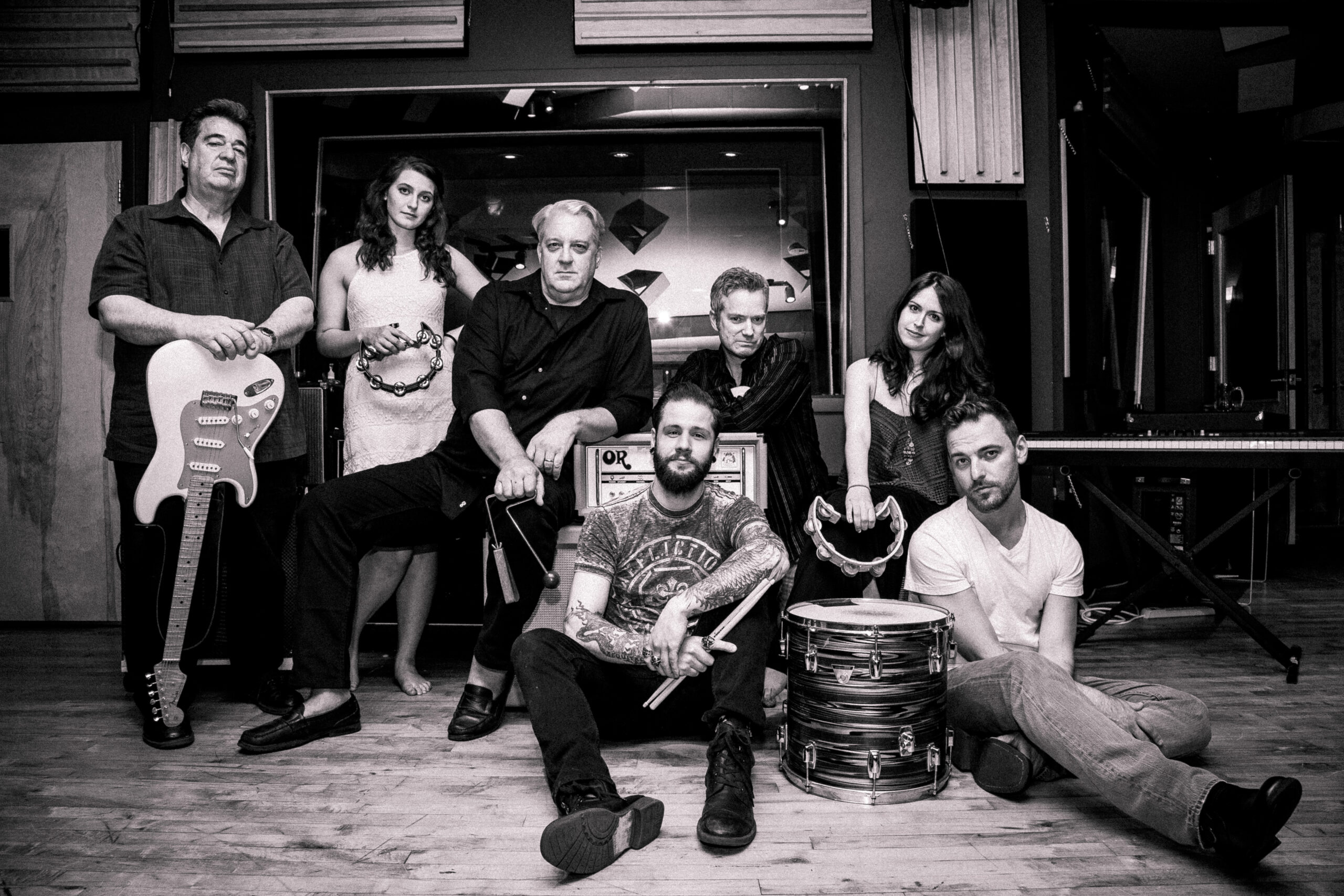 Genre-bending indie band The High Plains Drifters have released their upbeat holiday single “Santa! Bring My Girlfriend Back!” Check out the first look on Aesthetic Magazine below. Produced by Greg Cohen (Robin Thicke, Nile Rodgers), the track tells the story of a distraught man who seeks solace in drink after having his girlfriend stolen by Santa Claus.

Inspired by a boozy and drama-filled Christmas dinner, the track features an array of instrumentation marrying traditional and contemporary sounds including upbeat marimbas, acoustic guitar chords, and horns reminiscent of everyone’s favorite holiday classics. After waking up the next morning and trying to remember the prior night’s holiday debacle, Larry Studnicky (HPD’s front man) was inspired to put pen to paper and craft the holiday tune after the melodies kept ringing in his head like a hangover.

“Santa! Bring My Girlfriend Back!” is a precursor to The High Plains Drifters forthcoming second album to be released in 2021.

“I cannot think of a better time to release this song than this year. Yeah, it has been a crappy year for the whole world, but at Christmas, perhaps more so than at any other time, the people of the world are going to want things to feel NORMAL again,” shared Studnicky. “They’ll want to have smiles on their faces and to enjoy some old-fashioned Christmas cheer. We hope this song will help them do that.”

The forthcoming collection is the follow up to the band’s debut self-titled album The High Plains Drifters. Their first offering conceptualizes a listening experience of a sonic road trip across the country, where your radio station of choice automatically tunes into different musical genres as you travel. As they propel the listener through various genres (pop-punk, mainstream rock, ballads and more), one thing is certain: The High Plain Drifters offer a cohesive body of “feel good” rock-n-roll. PRESS HERE to stream.

Before coming together as The High Plains Drifters, the group’s members worked alongside an array of legendary acts and artists including Pete Townsend, Brian May & Roger Taylor of Queen, Suge Knight of Death Row Records, Fred Schneider of the B-52’s, and Mickey Dolenz of The Monkees. John Macom’s music has been showcased in indie movies and TV shows, including Dawson’s Creek, Party of Five, and Felicity.

Larry on the Creative Process Behind “Santa! Bring My Girlfriend Back!:

“This song was one of the magical ones (a true Christmas miracle!) that came to me in a flash and then came together with the band very easily.

I wrote the first verse and the chorus on the day after Christmas 2018. I had hosted a portion of my side of the family at my home for the holiday. On Christmas day, some very unexpected “drama” erupted. Erupted like a volcano. I don’t want to go into details, but it was not pretty.

Everyone slept in on December 26th. I think that I was the first person into the kitchen and, while puttering around making coffee, the lyrics and melody just popped into my head, starting with “I’ve been drinking way too much this Christmas. My friends all want to know the reason why.” I just went with it — trying right away to figure out “why is the singer drinking like a fish all Christmas?” I came up with the idea that he was in the dumps because his girlfriend had run off with Santa Claus. Once I had that central idea, the rest of the lyrics flowed almost instantly.

In June 2019, I introduced an a cappella version of the song to the full band: John Macom and Mike DoCampo (the guitarists), Charles Czarnecki (keyboards), Kyle Cassel (drums), and Dave Richards (bass).

Our producer, Greg Cohen, and I got together with John Macom, and we worked out some very basic musical ideas. During that writing session, I came up with the bridge (the part that begins with the line “Tell me more, pour me a whiskey.”) Then we put the song away for a year, until I was ready to start work on the 2nd High Plains Drifters Album. We began work on Album 2 in June of this year.

I got John Macom involved again and, between him and Greg, they fleshed out a full working demo by early July 2020, complete with some basic (programmed) horn arrangements that I heard (playing in my head) on Verse 1. We sent the demo to the rest of the band — and I was very explicit about where I hoped they’d take the tune. I emailed them as follows:

“This song cannot lean Country or Americana. It must be more like a traditional Sinatra or Dean Martin holiday tune. Accordingly, it will probably have horns on it. . . .  After all this quarantining, I am dying to see you guys again in the studio. It is long overdue.”

All the guys in the band are brilliant musicians. We met in the studio on Saturday, August 8th and with everyone in one room, the music organically just came together. In fact, a rough mix from that day is very close to what’s being released. All that was missing was the horn section I had been hearing in my head.

Greg Cohen found our horn section in Los Angeles: the 305 Horns (Michael Cordone and Jesse McGinty). They got the demo (with the programmed horn parts that I heard on Verse 1) and were told to play those parts (if they thought the parts “worked”) and then do whatever they thought made sense. The parts that I wrote in fact survived but after Verse 1, Mike and Jesse just totally killed it. I couldn’t have asked for better horn arrangements if I had been Sinatra working with Nelson Riddle.

That’s it. A Christmas miracle.“

On What It’s Like Releasing a Christmas Song During COVID

“I cannot think of a better time to release this song than this year. Yeah, it has been a crappy year for the whole world but at Christmas, perhaps more so than at any other time, the people of the world are going to want things to feel NORMAL again. They’ll want to have smiles on their faces and to enjoy some old-fashioned Christmas cheer.

We hope this song will help them do that. In testing the song with a few friends (including our band’s female backup singers, who were not geographically around to work on the tune,) I kept getting feedback like this (quoting backup singer Christina Benedetto): “This song is so much fun!!! The lyrics are a hoot.”

Other people emailed me or called me to say that they just kept smiling as the song played. That is exactly what we want our listeners to feel — the happiness and joy of the Christmas season. Including, for some, the joy of NOT having your girlfriend stolen by Santa.”

On What Fans Can Expect for Album 2

“Our debut album featured songs in a wide variety of genres — including Americana, rock ballads, pop-punk, and country. Some reviewers praised our band for its versatility, whereas others panned us for that. We were shocked (thrilled!) to have our work compared to such great artists as Simon & Garfunkel, Johnny Cash, Carl Perkins (who I knew) and Merle Haggard. Nobody in the band (other than the backup singers) is a kid, and we all love lots of styles of music. We indulged our broad-based tastes arguably a tad too much but who knew we’d live long enough to do a second album, right?

On the forthcoming album, most of the songs speak to the age-old themes of the popular music of all eras:  male-female relationships and what holds those together or blows them apart. There are songs about love found and love lost. Picking up on the idea of blowing things apart, there is one song about Armageddon (inspired in part by all the civil unrest of this past summer.)

In contrast to our debut album, we are also working hard to write, record and produce songs with a more modern pop sensibility. Even so, we remain true to what brought us together to make music in the first place:  we want to put smiles on the faces of our listeners. We want them to hear stories that resonate with things that happened in their own lives or the lives of their friends. After hearing all of the next album, we hope to leave our fans saying “Damn I hope the High Plains Drifters will live long enough to make a pile of albums. We hope so.“